One of the first musicians I am meeting at the Juilliard cafeteria after the long summer months is the young pianist, Xiayin Wang.

It was composer Sean Hickey, who drew my attention to this rising star. “She is phenomenal, and you ought to meet her”, he said when I met him in his role as business development manager for Naxos America (see also: this article).

As I sit down with Wang, we talk about musicians we both know personally. And then it dawns on me: I had actually been present when Manhattan School of Music – trained Wang gave one of the most memorable performances of her career back in 2006, at Alice Tully Hall in New York City.

Her parents were in town and attending the concert, and so she asked her father, a professional Erhu player, to share the stage with her. “Celebrating our new life” was the title of a traditional Chinese folksong she performed with him as an encore to her concert program. It was hard to tell who had been more moved by this joint performance – the audience, or the father-daughter team.

“He was so nervous, and I was on fire”, smiles Wang as she remembers that very special evening. “In fact, at one point I thought I saw smoke coming up from stage, but it was just the dust of the resin that my father had applied too generously to the strings of his instrument, to make the sound very smooth sounding”.

And so the title of the Chinese folksong she performed that night became the motto of her career as a professional musician – a very fine beginning of a new life, indeed, and a celebration of a career taking off with tremendous energy.
Training at the Shanghai Conservatory from age 5, her mother devoted all her time watching over little Xiayin’s piano practice. Today, her daughter appreciates the benefits of her rigorous and disciplined early training..

Says Wang in a November 2007 Fanfare interview: “As a kid, you are not going to have that discipline, no matter how much you love music. The parents, the teacher have to sit next to you. My mom took notes every single lesson. I still have those notes”

Her training in the U.S. started in 1977; her first teacher at the Manhattan School of Music was Dr. Solomon Mikowsky.
Known for his gift of being able to detect future success in his students – he ‘discovered’ musicians like Kirill Gerstein, winner of the 2010 Gilmore Artist Award – Mikowsky took on Wang right after hearing her taped performance of Liszt’s Mephisto Waltz.

Four years later, Wang continued her studies with Nina Svetlanova, a graduate of Heinrich Neuhaus’s Moscow Conservatory class. After an extensive career as a pianist and a decade of teaching at the Manhattan School of Music, Svetlanova had made it onto Benjamin Saver’s list of “Most Wanted Piano Teachers in the USA” in 1990.

Today, Wang muses about the differences between Chinese and Western-style piano pedagogy:”In China, the teacher is dominant 100 percent. Over here, the teacher has 70 percent of dominance; the student has the rest”.

About the differences in repertoire, performance practice, and even in the way one listens to repertoire, she says: “In China, the teachers encourage students to listen to recordings before they learn the pieces, but when I came here, the teachers would not encourage you to listen before you learned the pieces … you don’t copy anything, you learn with your own understanding”.

Wang has long expanded her repertoire to include contemporary classical music – the kind of repertoire missing from the more generic Western classical music menu offered to pianists in China at the time, which generally ranged from Bach to Debussy.

She has also extensively collaborated with major chamber groups and composers. Several contemporary composers have gladly put their scores in Wang’s hands, and found them to be rendered with refined musicianship and a superb range of color and expressiveness. If one adds Wang’s charismatic personality to the mix, it comes as no surprise that critics and label executives alike are full of praise.

Sean Hickey is one of the composers Wang has worked with. She explains: “I met Sean through another friend of mine, David Homan, a composer and the director of the Israel American Cultural Foundation. Sean Hickey introduced me

to Earl Rosen, director of Marquis Records. I was thrilled that they offered me a contract, giving me free choice of the repertoire to be performed. The result was my 2007 debut CD, “Introducing Xiayin Wang”, with a varied repertoire ranging from Bach to Scriabin”.
Her second Marquis recording, released in 2008, was the “Brahms Piano Quartets” collection, with the Amity Chamber Players; a recording with violinist Catherine Manoukian will soon follow (Richard Strauss’s Sonata E-flat major, Op. 18, and Cesar Franck’s Sonata A-major).

In May 2009, her first Naxos CD, “Scriabin: Piano Music – Poems, Waltzes, Dances“, was released. Wang gets very enthusiastic when describing the composer: “There is so much color”, she says. 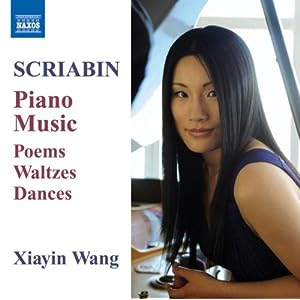 Then, when the newly renovated Alice Tully Hall was opened in 2009, Wang premiered Sean Hickey’s “Cursive”.
Further describing her friendship with Hickey, she adds: “Sean and I have known each other for a while, and as you know, composers always promote their compositions, and performers are always open to new ideas … He is such a genuine person, so actually the whole story was pretty simple: we both just came up with the idea of playing a new work of his at the Alice Tully Hall concert”.

The performance also included the premiere of “Enchanted Garden, Preludes Book II,” by composer Richard Danielpour. Pianist Christopher Rilley had premiered “Book I” at the Aspen Music Festival on July 4th, 1992. According to the composer, the “garden” refers to the garden of the mind. (Danielpour’s “Enchanted Garden, Preludes Book I and II”, played by Wang will be released by Naxos in March 2011).

Wang had met Danielpour when she premiered a piece by one of his students at the Smithsonian in Washington D.C.:”Through the course of playing the piece in a lesson with Mr. Danielpour, I got to know him, and he asked me if I was interested in premiering his preludes”.
This November will see a recording of Earl Wild’s piano music. In an August 2010 Examiner interview, Wang described one of Wild’s pieces, the “Toccata a la Ricky Martin”, as a rollercoaster ride for pianists.

The CD signing for this release will take place on November 23, at the soon-to-be- closed Lincoln Center branch of Barnes and Noble.

That same evening, Wang will perform with the Fine Arts Quartet at Alice Tully Hall, across the street from the CD signing. The performance will be dedicated to chamber music works of Schumann (to be released by Naxos in 2011).

“We started rehearsals in May already and will have two more performances before the Alice Tully Hall event on November 23”, Wang explains. “The recording itself will take place this December, at the American Academy of Arts and Letters, on 155th Street and Riverside Drive. It’s a great place, with almost 6000 seats and great acoustics. One gets a piano delivered … its really sweet.”
The Fine Arts Quartet has an extensive history of its own. Three of the quartet’s current artists – violinist Ralph Evans, Efim Boico, and cellist Wolfgang Laufer – have been performing together for over 25 years. Violinist Nicolo Eugelmi joined in 2009. Some of the quartet’s 200-plus recorded works have been released by Naxos.

Wang describes the specific challenges of the recording process itself:”The biggest challenge is to keep it fresh. It is all about mental energy. You have to put yourself at ease and forget the fact that you are recording, treating every performance as a performance”.

And she continues: “The process involves a lot of correcting, and I am usually not very keen on going back to listen, but you get used to it. I do at least two whole takes, and then I go back to sections. The recording allows the artist an almost perfect performance, without necessarily withholding the ‘live’ effect”.

On recording with a chamber group, she says: “There is, of course, the added complexity of delivering the different voices. It is technically more demanding; you are working with different personalities, and you want to make everybody happy. But you also grow together in the preparation process, through rehearsals. It is an experience, and there are many choices to get it right, so you learn where to expect possible problems, and try to work them out”.

I am already looking forward to the upcoming recital with the distinguished Fine Arts Quartet this November, and will certainly compare the live performance with those ‘perfect’ recordings.

One thought on “Pianist Xiayin Wang Celebrating Her New Life”