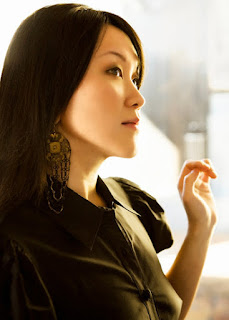 Klara Min does not seem to get nervous easily. I learned this while sitting in on an interview / conversation with recording producer Leszek Wojcik for the release of her Chopin Mazurkasdisk, which Delos will put out next spring. Wojcik had been guiding Min since 2011, when she made her very first recording of Korean composers for the Naxos label. Both disks were recorded at the same studio at the American Academy of Arts and Letters.

When comparing both recordings, which indeed find themselves at juxtaposed ends of the repertoire, Wojcik shares his surprise at how“Western” the previously recorded Korean compositions actually sound. “I was expecting a big pentatonic thing, some feelings of folk tunes. Instead there was rather an affinity to the Second Viennese School, Schoenberg and Webern…yet the Mazurkas could not be more contrasting to their rather academic, complex and almost Germanic structure …. here is a complete change of temperament,” he says and adds, speaking to Min, ”You were very brave to tackle such an undertaking. The Mazurkas are such known pieces, dear to everyone’s heart and they are so often recorded, and yet they can be interpreted in so many different ways.”

Min made her own choices in her recording and seems confident about them. “I was immediately drawn to the Mazurkas,” she shares,“when I was still a child, reading through the entire volume. Only later I listened to many different recordings. The music sounds so simple, but it is the most complicated music to perform. Its rhythm has to come sort of naturally; it can’t be really studied too much”. Each mazurka is so individual, idiosyncratic, each with its own polyphony and complex harmonies, yet you can’t practice endlessly- you somehow have to preserve the freshness and spontaneity for the deliverance of its true characteristics.”

Wojcik, who has clearly enjoyed recording Min’s playing, agrees with her and adds: ”Yes, exactly, this is the key. They are highly abstract, even though of course they have the nationalist thematic and are based on the dance’s three main forms: the mazur, oberek and the kujawiak from Poland, from different geographic regions in Poland. They’re not inspired by folk music, as often thought, really. Despite some rhythmic resemblances and perhaps the repetitiveness of motives kept by Chopin, his Mazurkas are highly stylized – salon versions- with complex compositional elements. And you are absolutely right; their simplicity demands a certain natural gusto. And balance of playing straight forward and the use of rubato. And there are so many choices to make by the performer, according to his/her personal tastes.”

But Min does not seem to have hesitations here. “I enjoy the use of Rubato since it creates the elasticity in the music…” and then Wojcik chimes in, ”The mazurkas are certainly full of invitations to use Rubato.”

Min finds balance in “her” Mazurka’s version of Rubato, as I find her able to balance many things, having witnessed her in action, wearing many different hats – often at the same time.

For one, she is the founder of NYCA – New York Concert Artists which has given many performance opportunities to young artists since its inauguration in 2008. In the city that never misses beat, music performances of the classical repertoire that Min has championed so far at NYCA are not hard to find. Yet she has managed to put out yet another series, successfully, in which she herself performs. To perform concertos with orchestra is what NYCA offers its pianist – soloists. In addition to orchestral performances NYCA presents their winner’s Carnegie Hall Debut Recital. The auditions are taking place in London, Paris, New York and Seoul.

“Indeed I sometimes feel like I am multiple personalities. In 2006 I organized many concerts in collaboration with Yamaha Artists Services, held at their showroom and at the Shepherd Church. NYCA grew out of my experiences in 2008. It was a way to take it to the next level. I think of it as an artist’s collaboration – a la “Davidsbuendler” the artistic choices have to be made by the artists, not by corporations. Pianists are used to mostly working alone. There is a real need for building trust and relationships, in order to collaborate and help each other. I had a vision, to do just that on a more continual basis and once that goal crystallized, the ideas how to make that happen, developed”, says Min.

And because she is a risk taker and not shy when she needs to ask for support for her many challenges, she has succeeded in establishing a real following. “I always knock at the door of cultural foundations, consulates and individuals who appreciate the importance of art for society. As artists, we do clearly have an important role; we are the hope of society.” She explains. ”When it comes to fundraising, people like to reach out to the furthest corners on earth to help – I however want to do something in my city, my community, where I am.”

And I have seen her in action – she knows everyone and reaches out her hand – genuinely to help others to reach their goals in the world of music, a world she deeply loves and feels she has a lot to give to.

Growing up as a Korean in Japan and then moving back to South Korea in 1989, where she studied at the very competitive “Seoul Arts High School”, Min is familiar with adapting herself to new situations, different people and mentalities. “I had to learn to be sensitive and assimilate to a very different culture at an early age. The strong influence of my mother’s supportive role has always encouraged me in all endeavors. Unlike many young pianists who were pushed by their parents to succeed, nobody ever pushed me,” she remembers. Her parents’ recognition of her independence early on made her confident about taking on responsibilities on her own.

“Unlike many other Koreans, my parents did not control me and I had a lot of freedom growing up.” She especially describes her mother as a kindred spirit who, as a musician herself, knew how hard it is to become a performing artist. Her mother asked her, “Is this really what you want?” but has always encouraged her to follow her dream.

From Seoul she then came to New York City and continued her piano studies with Solomon Mikowsky at the Manhattan School of Music.

Her independence became an even more acute reality for Min, after a financial crisis at home forced her to rely on her own resourcefulness.

“I had just finished my bachelor’s and went back to Korea for a short while to save money and get back on my feet, financially, by performing and teaching. This enabled me to finish my master’s degree speedily, after I had enrolled with Sara Davis Buechner and Byron Janis,” continues Min.“I always like teachers who perform themselves. I was so inspired that I finished all my course work within a year and by the third semester was able to extensively concentrate on the lessons.” Min continued studying in Luebeck, with James Tocco, whom she adored both, for his teaching and personality.

In 2002 she had her Weill Recital at Carnegie Hall debut, giving a World Premiere of Unsuk Chin’s Piano Etudes, marking a time when she started broadening her repertoire to champion contemporary classical music. She performed John Corigiliano’s music at that recital and then in 2008 she performed his Piano Concerto with NYCA, with the composer being present at the performance.

Her first recording called “Ripples on Water” (released by Naxos), which featured works of five Korean contemporary composers, got her many fine reviews for her performance. New York Concert Review wrote that Klara Min has: ”a lovely, nuanced tone, genuine expressiveness…excellent technique exuberance and vitality.”

Min will premiere a prelude, composed for her by Uzong Choe, the youngest one of the Korean composers collectively presented on the disc, at her upcoming recital at Alice Tully Hall, November 8th. The concert will also feature works by Schumann, Chopin, Messiaen and will of course include some of these cherished Mazurkas.