Noretta and John Leech: Standing fortissimo behind classical music and the artists of the Keyboard Charitable Trust 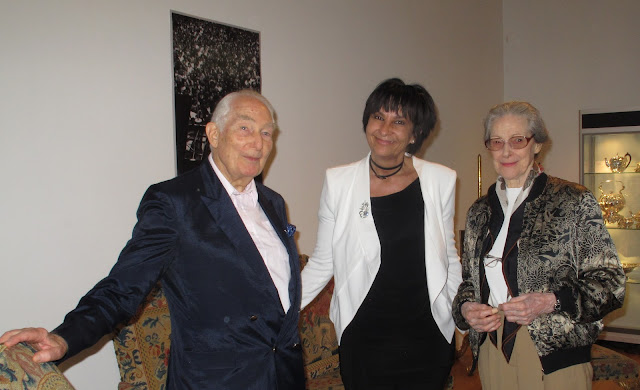 It all started in 1991, when John Leech wanted to surprise his beloved wife Noretta with a momentous 60th birthday present. The gift he chose was one that would make a real difference in the life of numerous gifted, young pianists.  The gift he chose was that together they would help ease the struggle many young pianists go through to receive the international recognition they deserve and to advance their careers as artists.
A concert pianist and venerable teacher herself, Noretta Conci had been the student and assistant to one of Italy’s most famous pianists, Arturo Benedetti Michelangeli.This association translated into many friendships within the music world.
Her husband, John, who was touched by the many trials endured by the gifted musicians he met through Noretta, thought he could help.  He saw that these musicians, without hired management, were in dire need of international performing opportunities. “There was never any kind of official support, just a few dedicated donors and supporters who were invested,” said Leech.
With Leech’s strong links to European and Atlantic organizations and through his career with the Commonwealth Development Corporation, he was able to help develop new platforms and audiences for the new talents whom Noretta was encountering in competitions or were referred to her by other teachers. “Noretta made it a rule not to recommend her own, current students to the Trust, to avoid conflict of interests from the beginning,” said John Leech, who regularly attends performances of many Keyboard Trust protégées. In fact, I myself met this old-world charming couple last year at Alessio Bax’s Lincoln Center recital.
The Keyboard Charitable Trust had initially supported Alessio’s extremely successful career launch, and it was wonderful to see that their interest in him extended to him personally also. It exemplified the powerful relationship each of their pianists has with the Foundation – and most of all to Noretta and John Leech, themselves. It also demonstrated Noretta’s capacity for recognizing and appreciating true potential in a young talented instrumentalist.
According to their last analytical count, John tells me that 38 percent of Charitable Keyboard Trust’s artists are making a substantial career on the world’s stages as performers, and an additional 15-20 percent achieve high academic accolades. The Leeches are the best indication of their artist’s accomplishment, since they are true and devoted fans of their artists, as well as their friends.

Through a funny coincidence, I realized how small the music worldreally was,when I was attending the Keyboard Trust’s New York SteinwayHall event,where they were presenting the marvelous Sasha Grynyuk last Thursday.

But then I ran into them again the following day at the Lincoln Center rehearsal of the Italian pianist, Francesco Libetta, where they were hugging and conversing with him in Noretta’s native Italian tongue. I had interviewed the established pianist and countryman of Noretta the day before, when he had actually told me about his warm relationship with them and the great personal connections that had been generously bestowed on him, and how these were helping him along the way. They had bumped into each other at Steinway Hall, where Libetta had been practicing, and so they were delighted to catch his rehearsal at Lincoln Center, during their few days in New York.
Of course you never know which personal connection will in the end make a difference to any particular artist. Keyboard Trust, with over 60 locations in 11 countries worldwide- but concentrated in the Americas, Germany, England and Italy-provides valuable opportunities to show talent and connect it to some of the most prestigious supporters of classical music and some of their leading artists.
In 1993 a special benefit concert in support of the Keyboard Charitable Trust took place at London’s Royal Festival Hall, given by Claudio Abbado with the then European Community Youth Orchestra and pianist Evgeny Kissin. Together with Alfred Brendel, Claudio Abbado became one of the earliest trustees of the Keyboard Trust, endorsing the Trust’s high standards of artistic endeavors. The financial support of big donors like the late Marion Frank and Nicola Bulgari are directly responsible for the sponsorship of 140 outstanding young talents.
Kissin himself had experienced the generous friendship and hospitality of the Leeches, when they had hosted Kissin and his family in London, during the early years of his phenomenal, international career. Never one to forget any of his friends who welcomed him with open arms, the Leeches hold a special place in his heart. And Noretta, to this day, admires his extraordinary talent: “There is only one Kissin!” she whispered to me on a different occasion when we met – again, at Van Cliburn’s Christie’s auction preview event.
Most important for many of their trusted artists,  the unconditional friendship of Noretta and John Leech transforms the everyday dealings of concert performances, travels and accommodations and elevates the experiences of these young talents, as they are being exposed to new audiences, and trying to make a name for themselves. A core group of devotees and trustees manage operations for the Keyboard Trust, but the vital force that brings it all together still lies in the tireless efforts of the person the Trust was dedicated to: Noretta Leech.

This all came clear to me in a conversation with the young artist, presented by the Keyboard Trust at Steinway Hall, Sasha Grynyuk. He said he appreciated how personally engaged the Leeches were as they organized all their events and he genuinely enjoyed their company, as well. His relationship with them started about six years ago, when Noretta heard the Ukrainian graduate of the National Music Academy of Ukraine perform in London, where he is now based, and is currently receiving artistic guidance from Alfred Brendel and Murray Perahia.
Chosen as a Rising Star by BBC Magazine and International Magazine, he also just won the Rio de Janeiro International Piano competition and the London Guildhall’s school’s most prestigious Gold Medal.
He is most excited about the release of his first recording, a collection of works by Gulda and Glenn Gould. He showed me his original cover design that features the chair of Gould floating in an angle almost Chagall-like, if it wasn’t so Apple-graphics styled black and white dominated. It is really original how he manages to place Grynyuk in a geometric line on the cover with Goulda and Gould.

The recording will come out June 4th. He played a sampler, with great flair and technical virtuosity, of Goulda’s  four charming pieces from ‘Play Piano Play’at Steinway Hall.
His recounting of how excited he was to be chosen by the Piano Classics label (distributed in the USA by Harmonia Mundi) for this opportunity was upbeat and intelligent and he managed – similar to his playing — to embellish his story with just the right amount of intricate detail. For example, he told me how he had to buy the rights to the image of Gould’s chair from Sony, who had used it for their label, but how this was an important detail to him. Our conversation became a bit philosophical, as we talked about music and life. “It’s all about personal energy, and how to integrate life and music. It’s all interrelated in the end. Life is like music and if you lose it in life, you lose it in music.” I think he is referring to enthusiasm here.  “There are sudden revelations. You sometimes solve things in music that you are thinking about in life, and vice versa. The immediacy that happens when you make music is a state of mind, not a concept. To me, life as a musician makes complete sense.“
The Keyboard Charitable Trust’s Board of Trustees are an august crew: Claudio Abbado, Alfred Brendel, Moritz Von Bredow, Richard Bridges, Nicola Bulgari, Noretta Conci-Leech, Sir Clive Gillinson, Leslie Howard, John Leech, Sir Geoffrey Nice, Geoffrey Shindler, and Nicholas Snowman.
For all of you still-undetected talent: one can just apply to the Keyboard Charitable Trust. For more information see their website: http://www.keyboardtrust.org/