Today, as part of its 7th annual summer-music-celebration, Make Music New York, a 175 keyboard line-up on Cornelius Street garnered the Guiness World Book of Records, as the largest ensemble, performing (for more than 5 minutes) together.

Composer, pianist, writer, Jed Distler,  presented his world-premiere of Broken Record at the Grand Piano, hauled out onto downtown Cornelia Street, in front of the Cornelia Street Cafe. A favorite hang out of the artist, who curates a number of music performances at the Cafe’s showroom all year around, Distler is by far no stranger to the neighborhood. Surprisingly the small street held all of the 175 Yamaha-keyboards, carried from the nearby Lady of Pompeij church where rehearsals took place the previous evening and musician-friends, as notable as Philip Glass, came by to show their support. Almost everyone involved had clearly one thing in common – they came for the fun to participate in this grand gesture for music! 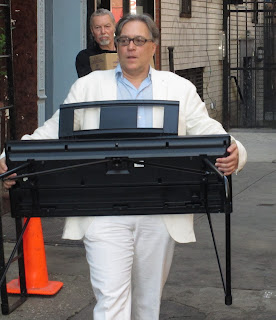 Everybody helps to shlepp the keyboards and stands…including Jed Distler. (see photo)

To be considered, the rules for entry into the Guiness Book of Records, ask for a traditional piece, in addition to the contemporary music, to be performed. So Distler chose the renowned Palchebel Canon, to open the show.

It was fascinating to play in this environment, hear the free harmonizing sounds of keyboards, divided into five groups, each kept at bay with their own conductor. 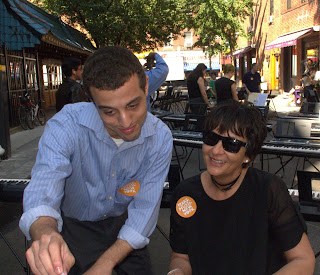 Even if there may have been some stressfull moments, like awaiting the musicians’ final arrival to complete the record number, or waiting in vain for additional, promised help…the event was a huge success. Well covered by the press and endorsed for it’s goal, the record won! But perhaps even more impressive for the cause of performing: so many bystanders felt our contagious joy at making music together! 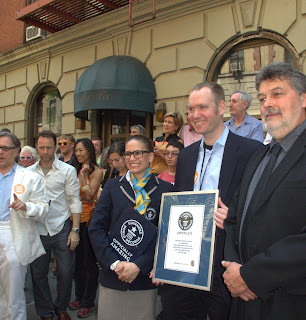