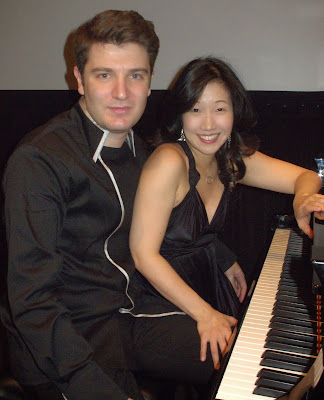 The players execute fast-paced passages across each other’s bodies, seemingly unfazed by close contact and coquettish reaching-over that one would think would interfere with the poise of most pianists’ controlled efforts at the keyboard.  Cued by rhythmic bows of twirling arms and flying hair, the performers carry onward, all with a discreet demeanor that only comes from really knowing the other’s every thought and move.  Such is the essence of their close proximity: every motion counts – and it sounds great.

What could come across as an awkward intermingling of extremities in a less-expertly executed encounter was a joyful and artistically-sound endeavor coming from the loving and experienced hands of Alessio Bax and Lucille Chung at their piano four-hand performance at Lincoln Center.

The audience that made its way to the Walter Reade Theater on a cold Sunday morning at 10.30 a.m. was in for a real treat.

Their four-handed account of Stravinsky’s own transcription of his ballet Pétroushka exemplifies the kind of intense collaboration in which the musical couple engages constantly. It is a project Bax had been enamored with since childhood. He and Lucille first began to work on it together in 2004 for a Chamber Music Festival performance in Ottawa. It’s not only a very challenging score, but turned out to be a constant source of inspiration, allowing the pair to find new angles of expression in their practice and performance. It also accompanied both pianists on their later tours through Russia and Canada. While both are accomplished pianists in their own right, this Sunday’s recital represented their Lincoln Center debut as a piano duo. The performance accompanies their CD, titled BAX & CHUNG, which was released this November on the Signum Classics label. 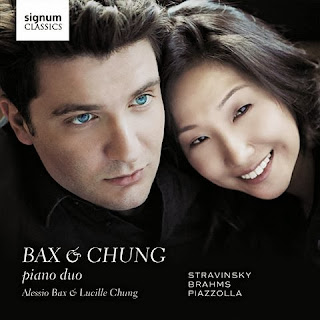 “To complete the disc, Lucille and I have chosen repertoire that, like Pétrouchka, has been at the center of our recent recital programs and exemplifies the special intimacy needed when sharing the same instrument,” Bax writes in his self-penned disc notes, “…we have arranged four tangos for our own four hands, using a basic version of the works and improvising on the go.  Every new performance of these tangos is different from the previous one, and to us this is a very unique and exciting experience.” Bax and Chung performed three of the four tangos that appear on their album at Sunday’s concert.

Alessio Bax’s description captures perfectly the sense of excitement and intimacy that the duo projected throughout their recital. I would like to add that the two of them, who are expecting their first child in the New Year, managed to truly engage the audience through their ability to compliment each other’s pianistic personalities – which is perhaps one of the highlights of four-hand performance in general.Lucille Chung and Alessio Bax play Astor Piazzolla’s Libertango