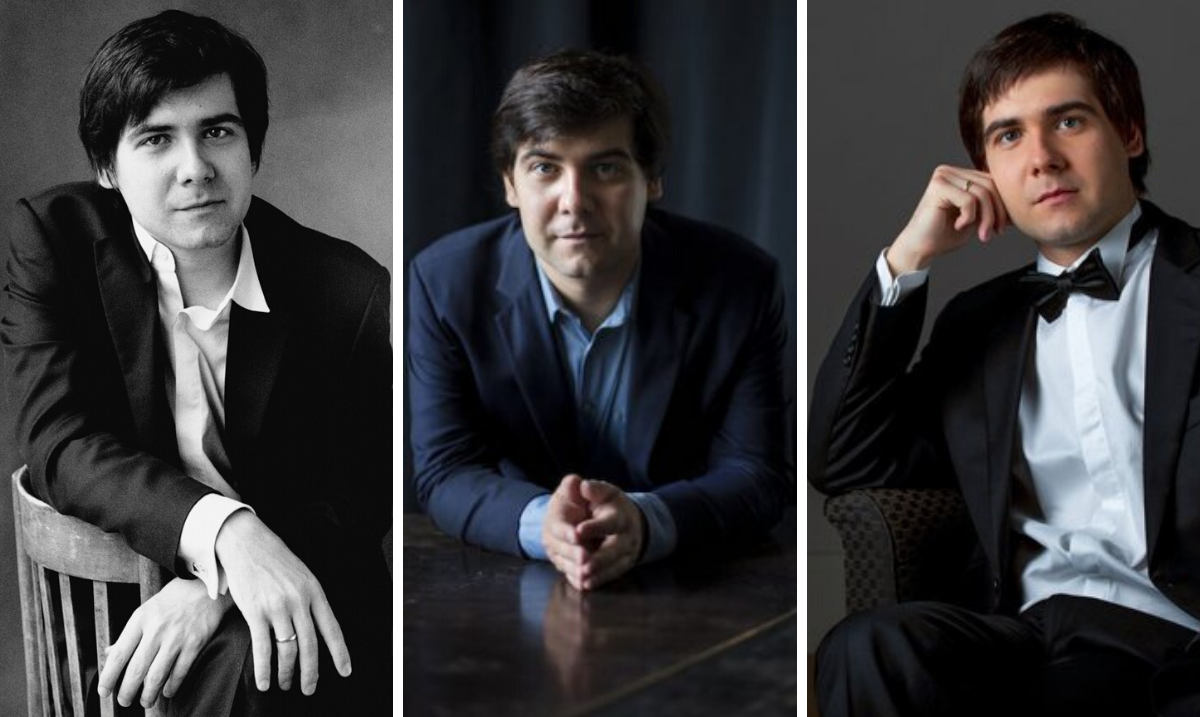 SAVVY NEW YORK PIANOPHILES THIS SEASON WERE PRIVY TO TWO ELECTRIFYING ENCOUNTERS WITH THE KIEV-BORN PIANIST VADYM KHOLODENKO, HERALDED CHAMPION OF THE 2013 VAN CLIBURN INTERNATIONAL PIANO COMPETITION. A STUDENT OF VERA GORNOSTAYEVA, THE LEGENDARY PIANIST AT THE MOSCOW TCHAIKOVSKY CONSERVATORY AND MENTOR TO SOME GENERATIONS OF EXCEPTIONAL TALENT LIKE IVO POGORELICH, KHOLODENKO POSSESSES A DISTINCT SOPHISTICATION, EPITOMIZED BY INDIVIDUALISTIC REVERBERATION, AND PALPABLE ON THE STAGE. HE PERFORMED AT JEROME ROSE’S INTERNATIONAL KEYBOARD INSTITUTE & FESTIVAL IN JULY, AND LAST WEEK AT FRANK SALOMON’S PEOPLE’S SYMPHONY CONCERTS SERIES. HIGHLY FOCUSED ON STAGE, KHOLODENKO MESMERIZES LISTENERS WITH A SEDUCTIVE, SEEMINGLY ENDLESS ARRAY OF COLOR AND REFINED SPARKLE OF FILIGREE TEXTURES, FASHIONED WITH AN ALWAYS BRILLIANT TECHNIQUE AND—AT TIMES—SUBDUED VIRTUOSITY.

In our personal conversation, Kholodenko, a thoughtful raconteur, recalls the events leading up to his success on the international competition platform and relates some fascinating insights about his thoughts on performance in general, including his particular objectives. Kholodenko has recently settled down in Luxembourg, where he resides with his wife, violinist Alena Baeva. The couple was married this August and appears in duo recitals as often as Kholodenko’s busy performance schedule allows; he now travels to international engagements about seventy-five percent of the time.

Kholodenko describes his participation at the 2004 Maria Callas Competition in Athens as one of the decisive moments in his musical life, when faith opens new doors and changes reality. During this competition, which is open to singers and pianists, alternating, every two years, Kholodenko was enrolled at the Kiev Central Music School, which he describes the institution as a counterpart to the famed Central Music School in Moscow. During his participation in the competition, he seemingly impressed Gornostayeva, who was then president of the Callas’ jury. “It was really a life-changing event for me and resulted in her inviting me to study with her in Moscow,” he says. With the title “People’s Artist of Russia,” the professor of piano and chair of the piano division of the Moscow Conservatory had celebrity status within Russia’s music world and advanced the legacy of Russian pianism internationally. Kholodenko’s talent garnered additional admiration, performances, and a stipend arranged through violinist Yuri Bashmet, who since 2002 had served as artistic director and principal conductor of the New Russia State Symphony Orchestra; Bashmet’s generosity allowed Kholodenko to stay in Moscow and continue studies at the Moscow Conservatory under Gornostayeva.

Winning gold in the 2010 Sendai Piano Competition in Japan, and the following year at the International Schubert Competition in Dortmund, prepared Kholodenko to enter the Van Cliburn International Piano competition, perhaps one of the most rigorous and widely visible showcases for pianists. His decisive win that secured recording and performance opportunities over the next years removed the necessity of partaking in future competitions. Gornostayeva, who was famous for training her students well for the “rigors of a pianist’s life,” passed away in Moscow in 2015, aware of the success bestowed upon her protégé, who following his Van Cliburn 2013 award, was appointed the first ever “Artist in Partnership” with the Fort Worth Symphony Orchestra.*

Looking back, Kholodenko internalized his impressions, formed during some of the preparation process for piano competitions. He fondly points out that some of the unusual program choices in Dortmund, for example, were mind opening for him. “During the competition’s four rounds, it had the most original repertoire, which gave me a lot to think about,” he says, helping him consider “who I am and how I would like to spend my time as a pianist.”

It may have happened here, that his unique sensibilities for Scarlatti, amply showcased during his recent performance, was established. “We were to perform a rarified program of almost forgotten Scarlatti sonatas, and dedicated to Schubert, the competition wanted different arrangements of a movement of a piece by Schubert…these were highly unusual repertoire choices and it made me think a lot about my growing interest for pieces off the beaten path,” he explains.

He gives a lot of thought to the programs he forges for a concert performance. “They become a bit like trail posts, in a sense,” he feels, “as a pianist, I have a clear direction of what I would like to achieve in a program. But then how I feel when I play on stage, that varies. There are a lot of reactive feelings involved, some doubts are unavoidable, like: ‘I would have done this particular phrase differently, made another choice here…’ But these thoughts come and go, of course. One has an image with accents, a road map to follow, but what’s mind blowing to me is the mechanical aspect versus the transcendental, the magic, and when that happens, it’s very real. I think more so than a dazzling ‘out of body experience,’ it comes from listening yourself, being at once connected with the audience. Having the means to translate properly what’s in our minds and hands to the audience is what unites us, and I am observing its essential truth—listening and instinctively feeling understood,” he shares.

Kholodenko’s first love remains Rachmaninoff; “I can never resist Rachmaninoff, I really love his music, his style, his recordings, but Rachmaninoff really played his own music a little more dryly than how we hear his work often performed by others,” he says. “Building on to the old school of piano—referring to the Golden Age and its romantic, grand gestures of absolutely subjective means of emotionally expression—it allowed us to bring in more abstraction,” he says. “Like Glenn Gould, we can bring something more three-dimensional into play, like an edgy sculpture versus the melded paint of an oil painting.”

Perhaps it is explorations like these where his fascination with Scriabin was born, a composer, as he says, he was really struck with upon discovery. “Scriabin speaks to you from the first note,” he says. “I first approached the cycle of 24 Preludes, then the whole program,” featured on his recording, which brought him some critical acclaim and the 2018 Diapason d’Or. While Kholodenko has been commended deservedly “absorbing melodic shading [and] glittering passage work” (Philadelphia Inquirer), critic Jed Distler coined this recording, a “low-voltage” approach. “In the Fifth [sonata], incidentally, Kholodenko perversely holds the final note down with the pedal for about 20 seconds instead of releasing it quickly. The disquieting mosquito that Scriabin depicts, and Vladimir Horowitz so pointedly characterizes in the Op. 42 No. 3 Etude emerges here like a stingless honeybee…Granted, Kholodenko often fares well with the smaller, lyrical Preludes, such as in his lovingly flickering performance of Op. 16 No. 2, or in the gorgeous way that he projects Op. 16 No. 3’s long arching phrases across the footlights. And there’s no question that Kholodenko controls his instrument to the point where nothing gets in the way between intention and execution. But this is essentially low-voltage Scriabin” (Classics Today).

Interestingly, Kholodenko mentions his thoughts about his interpretation, and in respect to the much-argued release of that final note, he says: “This recording coincided with [the beginning of my] exploration of the new Fazzioli, F 308. The Scriabin recording in Italy was my first experiment with this amazing instrument, and it impacted the recording and my approach to performing his music. The Fazzioli is slightly bigger than a Steinway D and has one additional pedal, which enables a particularly nuanced and wide range of color. It’s absolutely wild to have such an additional level of control, but one has to get used to utilizing it, an additional foot might have come in handy. Reminding me of how technical advancements have always impacted the sound production on the instrument, just like when the sound produced with the use of the knee pedals in the old Hammer Claviers changed when foot pedals were invented, there was this feeling of a ‘historic’ incident, generating these amazing overtones. Incidentally, as there is no particular instruction when the pedal has to be released, I kept Scriabin’s final note of the Fifth sonata, going until the last of those overtones succumbed to silence.”

It becomes very clear that Kholodenko has thought hard and long about certain artistic choices, which resound like a blueprint in performance. Some of them are triggered by his “historically-informed interest,” which influences his philosophy of sound production. I do not feel they are lacking emotional capacity, which often comes through in his powerful and exalting or tenderly imbued, lacy interpretations. At the same time, his choices adjust according to his wishes, expressed with perfect control at the keyboard to balance the modern apex of the instrument and its millions of colors with a sound he imagines would be appropriate for the intimate setting of Beethoven’s period instruments, all the while giving the sounds their own lilt and compounded texture. “Given all our possibilities of the modern piano, it’s no wonder we do at times feel ‘naked,’ and back to bare bones in repertoire like Mozart, or Scarlatti,” he mentions, for which of course he has developed a sublime sensibility. Backstage, after his last New York City performance, he was told in an unofficial ravishing review: “Your Scarlatti truly sounded like Scarlatti!”

Personally, I felt this peculiar dualism of restraint in his performance—painting with a big brush the most lavishly organized works, and a more powerful emotional release in the more strictly organized, classical ones. The experience recalls Horowitz, whose approach to this paradigm was, famously, “one should play Mozart like Chopin and Chopin like Mozart. “

Kholodenko’s first recording for Harmonia Mundi was released in November 2013, featuring Stravinsky’s Trois mouvements de Petrouchka and the complete Liszt Transcendental Études, which Audiophile Audition deemed “pure gold.” A disc of the Grieg Piano Concerto and Saint-Saëns Piano Concerto No. 2 with the Norwegian Radio Orchestra under the baton of Miguel Harth-Bedoya was released in summer 2015, and the complete Prokofiev concerti with the Fort Worth Symphony Orchestra in 2016 and 2017. For Arthaus, he recorded Prokofiev Piano Concerto No. 5 with the Mariinsky Theatre conducted by Valery Gergiev, released on DVD.

Following his Scriabin release in 2018, Hamonia Mundi continues their collaboration with Kholodenko. His solo discs of works by Tchaikovsky and Prokofiev have been recorded and are awaiting publication. A magnificent amount of pianism is expected from his also already recorded disc that will feature a selection of late 19th and early 20th century Godowsky transcriptions—fiendishly difficult variants of Chopin’s works, many conceived for the left hand alone, with varying degrees of harmonic and contrapuntal additions (Godowsky made fifty in all) will be paired with the original Chopin pieces that inspired these transcriptions.

New Yorkers were already able to admire the particular elegance of Kholodenko’s Godowsky, channeling to absolute perfection the leading melody between tossed off, often one-handed keyboard-spanning whirlwinds of note clusters and glistening runs. “The Godowsky-Chopin project will give an interesting glimpse and a perspective into the composer’s and transcriber’s stylistic differences, and particular variances of both composers. I am hoping to reveal a unique view of a comparison of their differences, shedding new light on both,” Kholodenko says.

He continues to explore lesser established repertoire, whether paired with the renowned, or as a promoter of new works, most notably music written by his friend, Alexy Kurbatov. With his fellow pianist, Ukrainian-born Andrey Gugnin, Bachauer Artists Competition Gold Medal winner (2014), Kholodenko formed iDuo to promote four hands piano literature, with recordings released on Delos Records.

* Well-known in Russia, Gornostayeva gained international fame only recently when she began to give master classes internationally. The six-volume series entitled “Discovering a Legend,” produced on the LP Classics label, co-founded and produced by one her late laureates, pianist Vassily Primakov, showcases live performances from throughout her career. The album was so popular with Chicago radio audiences that the radio station, WFMT, altered its programming to play all six volumes on the day of her funeral, January 22, 2015.