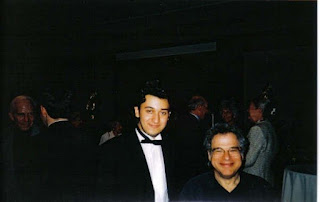 Hungarian violinist Erno Kallai has certainly large shoes to fill, being a student of legendary violinist Itzhak Perlman at Julliard. Studying with this master puts Kallai in the midst of a continuing tradition inspired by generations of eminent violinists, masters who seem larger than life. I find myself thinking as I wait to meet Mr. Perlman in front of his studio’s entrance on the 5th floor of the Juilliard School, that this could be quite daunting for any young violinist, even if it manifests a dream come true, as it does in Kallai’s case.

The teaching studio with a view over its own cosmic, classical music arena around Lincoln Center, once belonged to Dorothy DeLay, who had taught generations of the most gifted violinists seeking her out from around the world,  including Perlman himself from age 13 . The grand lady and pedagogue, who had started as the assistant to Ivan Galamian, apparently a hugely revered, if feared, authority of the violin, continuously  produced a list of students that reads like the ‘who’s who’ in the upper echelon of violin stardom. (Her legacy is very well described in Barbara Lourie Sand’s “Teaching Genius.”)

Significantly, she managed to keep each of her student’s unique style, individuality and their specific musical persona intact.  There was no churning out soulless followers of a certain technique. Many loving, humorous tributes to her quirky sides from “her prodigies” credit this great powerhouse for inspiring their successes and for her capacity to support them, above all, in becoming independently functioning musicians and human beings.

Mr. Perlman, who became her assistant before taking over her studio as an educator himself, adopted her successful, pedagogical approach. According to Kallai’s descriptions and my own impressions of Mr. Perlman’s attitude towards teaching and his close and personal engagement with his students, there seems to be no better home-away-from-home for aspiring violinists. These devoted musicians are, just as importantly, genuine human beings and the approach needs to stay flexible and personal. Says Perlman:“Students, like teachers, come in different categories. I myself was a different student with Galamian; I was so intimidated I just followed every instruction without any critique. I did not rebel, or ignore his advice; I just accepted it without analyzing it. With DeLay, there were suggestions and individualistic thinking. That is the kind of teaching I try to adhere to – even though I learned a lot from Galamian’s authorative approach as well – and Erno is the kind of student I was, with DeLay,” explains Perlman. “We have a lot of good discussions; there are always suggestions and possibilities, musically. Erno knows what he is doing. You just look at his hands and you know he understands the instrument.”

Perlman had always been Kallai’s hero. Starting to play on a toy violin at age 2, Kallai grew up with music surrounding him all his life. There was never a question of becoming anything else, but a violinist.

Born and raised in Budapest, the son of a violinist who specialized in performing Gypsy music, Kallai saw an advertisement for the Perlman Music Program on Long Island.  This Program has been in existence since 1995 and was founded thanks to Toby Perlman’s initiative  (a former student of Delay herself) to create a summer camp for budding violinists 8-18 years old that offers a supportive musical environment.

Kallai has utmost respect for Perlman as a teacher. Perlman conveys valuable musical messages through his expertise and openhandedly provides the necessary exposure for his students. On many occasions he will provide opportunities for them to share his limelight on stage. But there is yet another element that elevates his illustrious popularity into congenial love and respect from his students, like Kallai, and that is his enthusiasm. Perlman picked Kallai out after just hearing a few notes of his performance on a technically flawed audition tape, which had been sent to the Perlman Music Program in 2003.”I listened to the tape together with Toby, my wife. The Perlman Music Program is her brainchild! We both said right away: ‘We will take him on!’There was something about his playing that I liked very much; he was a virtuoso with a good technical foundation and good sound, and his style and his attitude to the instrument were special,  kind of in a grand tradition, the way I like to hear violin playing.”

Leisurely positioned in his electrically operated wheelchair, as if it were just the next available seating option, Perlman’s strong, free spirit has allowed him to not be confined or defined by his physical limitations, which are a consequence of his contracting polio at age 4.  With an enormous reservoir of strength and dignity, Perlman has surmounted any initially anticipated limitation. He has not only achieved the greatest success as a performer and recording aritist, but is a gregarious teacher who exemplifies the meaning of being a real “Mensch”( Yiddish expression for a worthy character of a human being) first and foremost.

His activism for the handicapped is world-renowned, and it is in part thanks to his grand, artistic stature that Carnegie Hall – as have other public institutions, recognized the need to install chairlifts, as a result of his efforts to gain access in an equal manner.

“I had had enough of spending my backstage life in the freight elevators of America’s concert halls.”  (Quoted by Sand-Teaching genius p.190)

At Juilliard, his studio comes equipped with a remote controlled door, assuring him easy access.

Itzhak Perlman’s involvement in coaching and conducting his program’s own orchestra led to more expansive thinking. Out of the efforts on Long Island developed the Israeli native’s, Perlman Music Program in Jerusalem and a shorter winter version at Sarasota.

“My first summer on Long Island took place in 2003,” recalls Kallai. “I was so excited to have been accepted to the program and loved every minute of its six weeks of intense master classes, chamber groups and orchestra rehearsals, and there was also participation in the chorus. The whole day was filled with musical activities and about four hours of private practice each morning. I made a lot of friends; some of them are studying at Juilliard as well. After that I was re-invited the following summer and then also to the winter program in Florida. When Mr. Perlman approached me during my second year, as to whether I was going to apply to Juilliard as his student, I was flattered. The fact that he recommends a student is of course a great opportunity, but the rest of the six jury members must agree also,” explains Kallai. In 2006 Kallai made his way to New York’s Juilliard, where he will finish his Master’s Program this May of 2012. 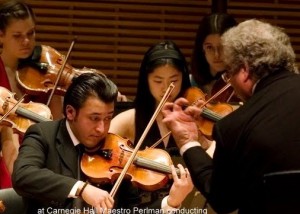 Photo: Tamas Revesz
Kallai describes Itzhak Perlman’s playing as: ”different from anybody else’s. But he does not want his students to emulate him, or anybody else. He truly makes you think for yourself, he does not tell everything, we discuss a great deal and see what inspires. Being in his presence is awesome. I learned to listen to myself and to music in general in a different way. After I met him I can now hear more clearly, how the structure within the music demands to be built up, how to bring out different nuances, more colors and sound. Even if those things are in you, you need the proper feedback for them to come out securely, to give you confidence.”

“When Erno won the Juilliard competition with Prokofiev’s concerto,” says Perlman, referring to Kallai’s 2008 Carnegie Hall performance of Prokofiev’s 2nd. Concerto,”it was quite clear that he has what it takes to be a great performer. He is capable during a performance to keep his spontaneity, through his musical inspiration. There is this extra thing you do, during a performance. The adrenalin that works on stage makes you do things slightly differently. It could be rehearsed to a degree, but you feel it in the moment. It is this certain kind of mindset where you actually- musically speaking- improvise. I always tell my students – although more nerve wracking in its own right, the first performance is very easy, because, well it’s the first time. But what do you do the second, the third time around … to stay engaged. That’s when your musical inspiration has to come in…. that and listening intently.” Perlman explains.

Perlman puts his full support behind his words of praise. In November, Kallai took part in Perlman’s Arsht-Center chamber performance, in Miami.  During the 2012 Semester, Kallai will accompany Perlman on a chamber music tour that will bring them to Mexico, Toronto and Virginia. Playing side by side his mentor is an experience Kallai knows to appreciate:” He actually takes his students seriously as musicians and human beings. He encourages the individual expression in music – as much as he does at his dinner table in his home. We- his students – end up feeling like his extended family and love to come to play and talk with them and often Toby- his wife- will cook for us, which is always an extra treat.”

For Kallai’s upcoming performances, as for example his recital in September at the Louvre in Paris check his website: www.ernokallai.com